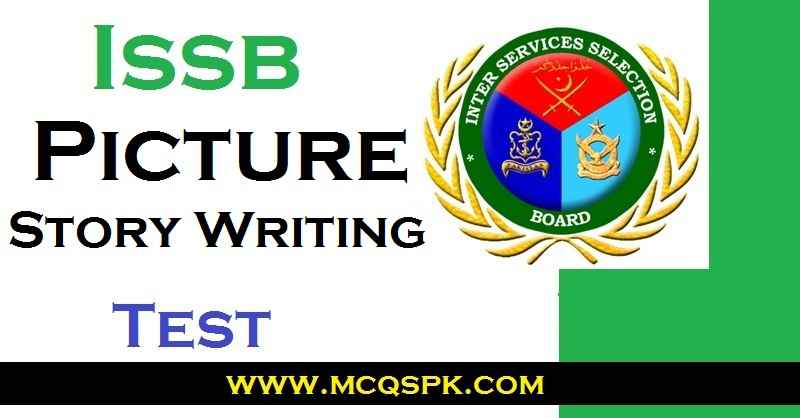 The third most important test in ISSB Psychological test after Word Association Test and Sentence Completion Test is the ISSB Picture Story Writing Test. This test is also conducted on ISSB Day 2.

It is in Pakistani terms called story writing test. But its actual psychology name is “Thematic Apprehension Test”.

In this test, a picture is shown to you and you have written a story of a picture shown to you on the screen. The pictures shown in this test are black and white sketch pictures with no colors. Different objects or characters are shown on a picture and you have to make a story out of it. ISSB Picture Story Writing Test is also called Thematic Apprehension Test in Psychological term.

Total 4 pictures will be shown to candidates on the screen. Each picture will only stay for a short period of time and then it will disappear.

A single picture will be shown for 30 seconds and then more 30 seconds will be given to you to think a story out of it in your mind.

After that, you will be given 3.5 minutes to write down a story. The same process will be repeated for other 3 pictures.

Following are some of the helpful tips to tackle the ISSB Picture Story Writing.

Below you can find the solved ISSB Picture Story writing. Mr. Ahmed is a school teacher. He also does some physical exercise during his spare time. One day when he was on his usual exercise, he listened to a voice of bird which was coming from the top of the cupboard.
He tried multiple times to see but it was at the high position. So he used a rope to climb, There he saw a little sparrow.
Ahmed is a very kind person. He picked the sparrow and make her fly outside. Mr. Adnan is a businessman. He has a son named Hamza. Mr. Adnan was going to drop his son to school early in the morning, but in the way, he got severe pain in his stomach. So they went to the nearest hospital for a check-up.
Fortunately, the doctor was at the hospital at that time. He started to check up of Mr. Adnan. Hamza was praying for his father. After treatment, Mr. Adnan got much better. The doctor advised him to have bed rest. Mr. Adnan dropped Hamza in the school and went back home. Mr. Zubair is a businessman. He is a very hard working person. He always tries to do work in the office as well as in his home. Zubair has to prepare a presentation about his business plan. He works hard even in his home to prepare a presentation.
He did his work till late at night and finally completed his task successfully. After that, he got much tired and sweating. He swiped his sweating by his arm and then relaxed. He was very happy because he did his task timely.